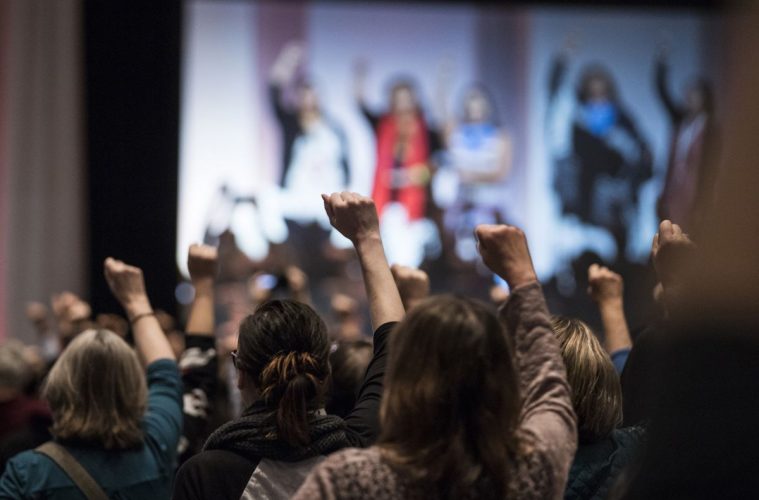 Since the 2016 election, women have been mobilizing at unprecedented levels: running for office, making their voices heard on the issues they care about, and demanding change.

In the midst of this encouraging rise in women’s activism, we must remember that women’s representation in U.S. politics has been dismally low for decades, and remains so: in 2020, women make up only 23.7% of Congress and only 9 out of 50 governors are women. And the U.S. lags behind at least 75 other countries in terms of women’s political representation.

Join us in taking action to bridge this political divide and achieve parity in politics.

As a follow-up to our successful event at the NYU Skirball Center, the aim of this event is to analyze the landscape of women’s political leadership, the critical gaps that persist, and innovations in providing more opportunities, pathways and power for women leaders. Throughout the event, we will focus on how we can ensure more women rise to political leadership, and, most importantly, where we go from here. This event will feature a high proﬁle keynote or ﬁreside chat and a series of panels on timely themes. Attendees with leave with key action steps to assure forward momentum. More details coming soon.

What Will It Take: Women’s Political Leadership 2018 Event

We want to thank everyone who attended and supported our Women’s Political Leadership Event, which was held October 15th at NYU’s Skirball Center in New York City. It was an inspiring evening featuring Marianne Schnall’s Q&A with Democratic Leader Nancy Pelosi and a panel discussion moderated by Pat Mitchell in which Symone Sanders, Brittany Packnett, Alessandra Biaggi, and Kerry Healey offered their powerful insights on why it’s so crucial to have more women in politics and how we can all get involved in making that happen.

Click here to visit the photo gallery of the event. 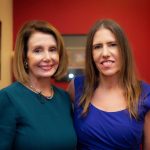 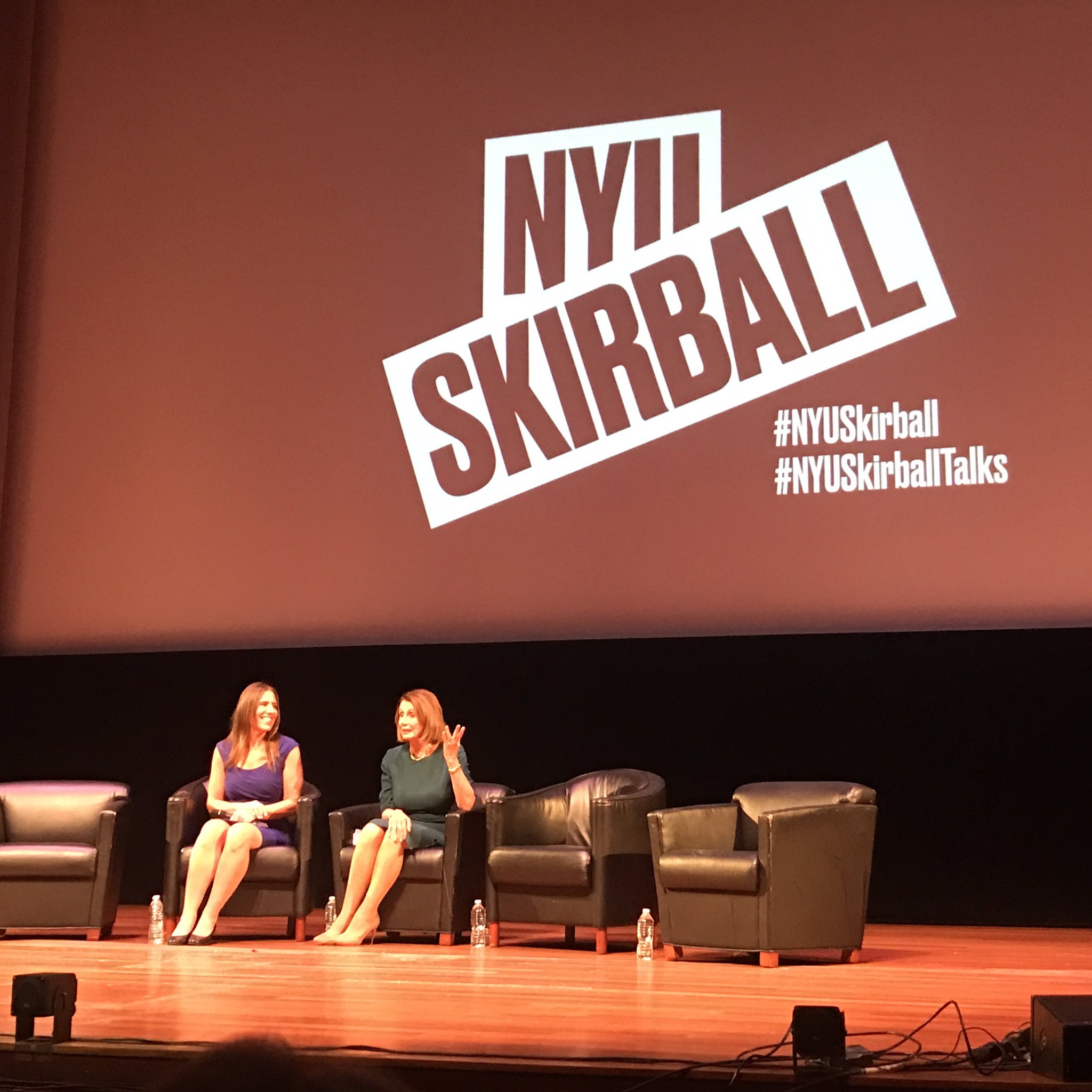 “Women: know your power, and know you’re needed. Be yourself and be confident in the fact that what you have to offer is unique….
Don’t agonize—organize!” 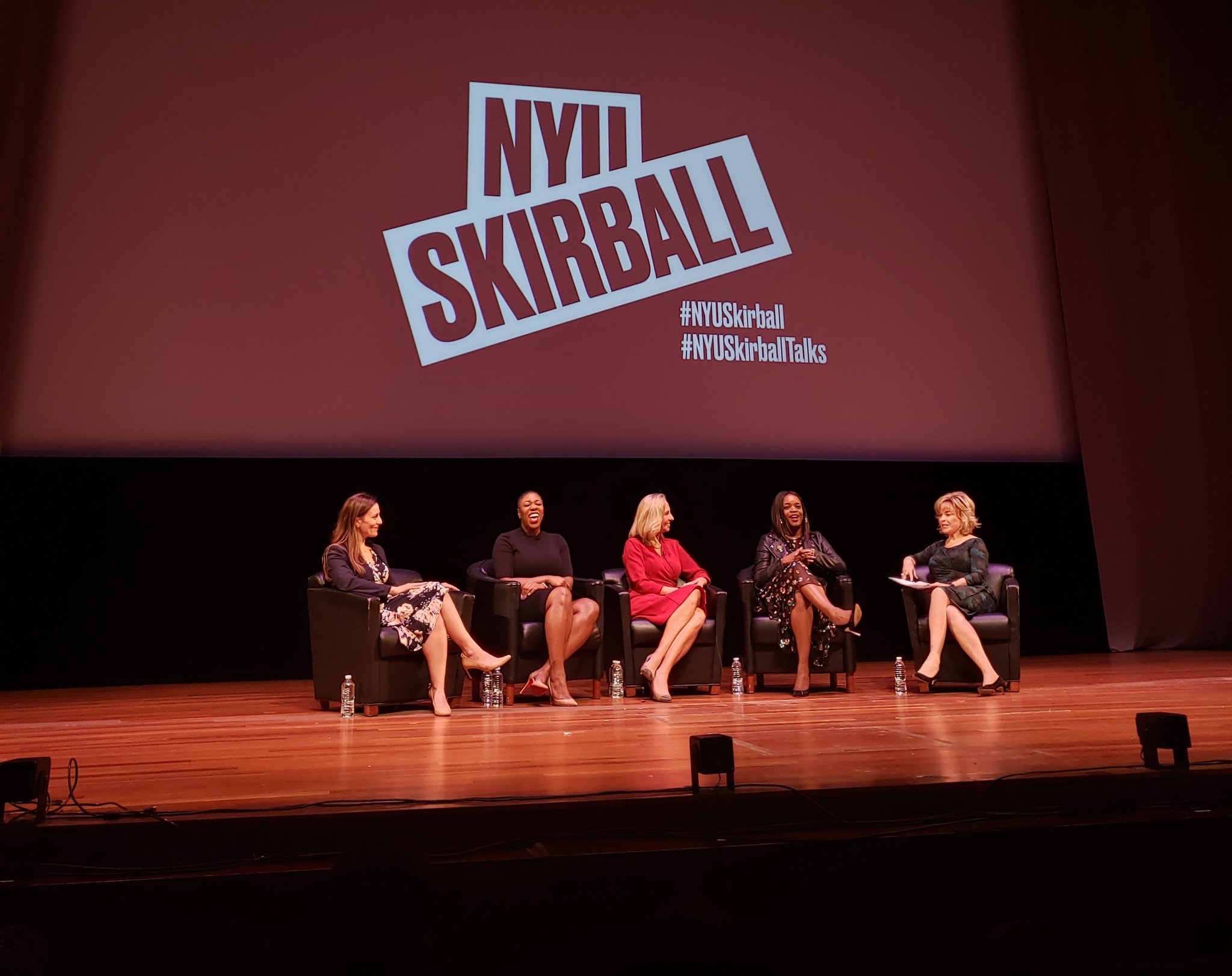 “I want to be the type of leader that isn’t reacting but is responding. There’s a lot to get mad about, but we also want to get people excited.” 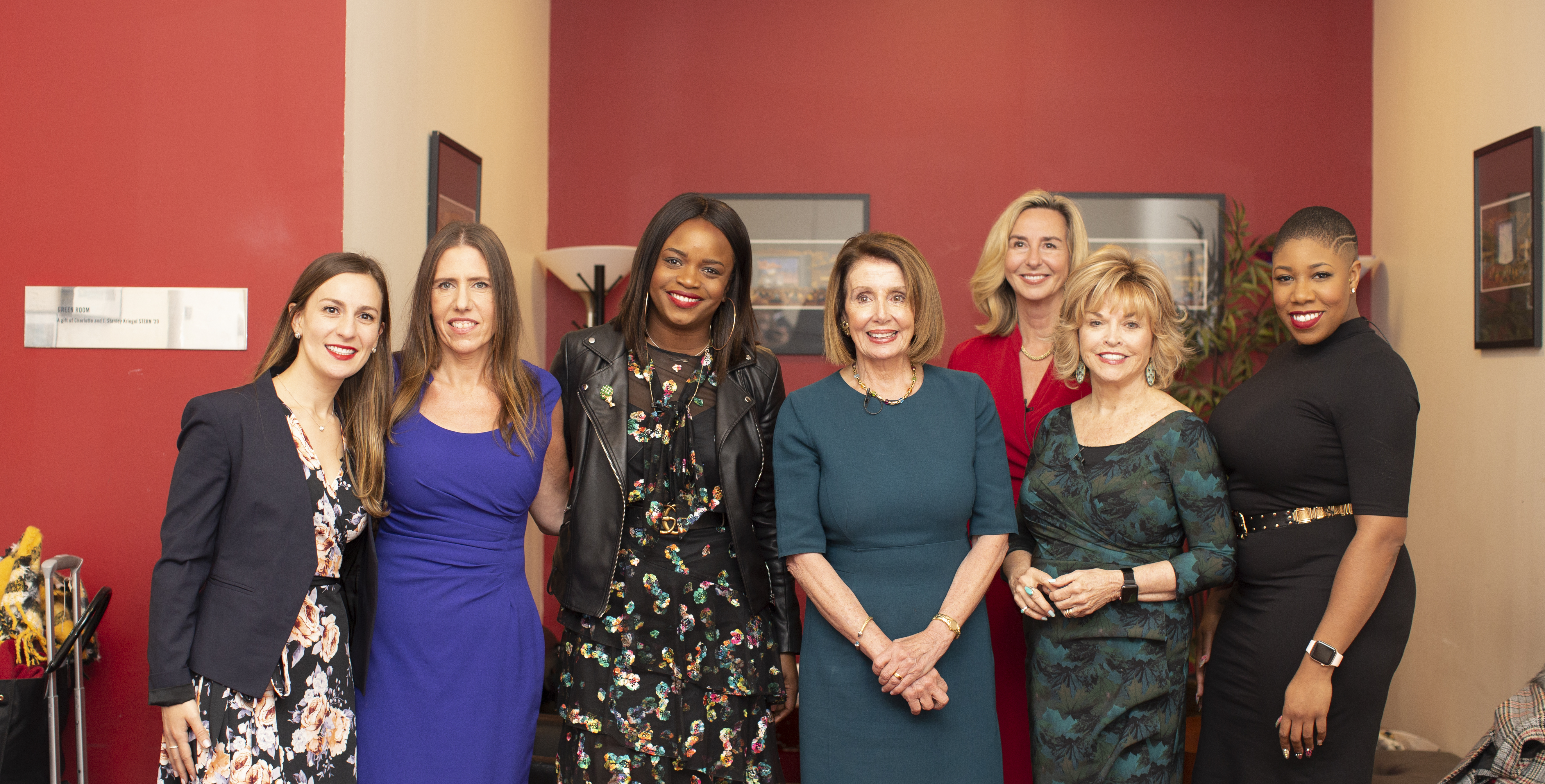 “What is it that brings us together that can be groundbreaking, that can be different than what we’ve been talking about on the left and the right?”

“Women get the job done. We have been doing that in our communities for years. So many women realized this cycle that they could do that for America.”

Special thanks to the Barbara Lee Family Foundation and EILEEN FISHER for their support of our Women & Politics event and Initiative and for the important work they do to advance women’s equality, representation and leadership. 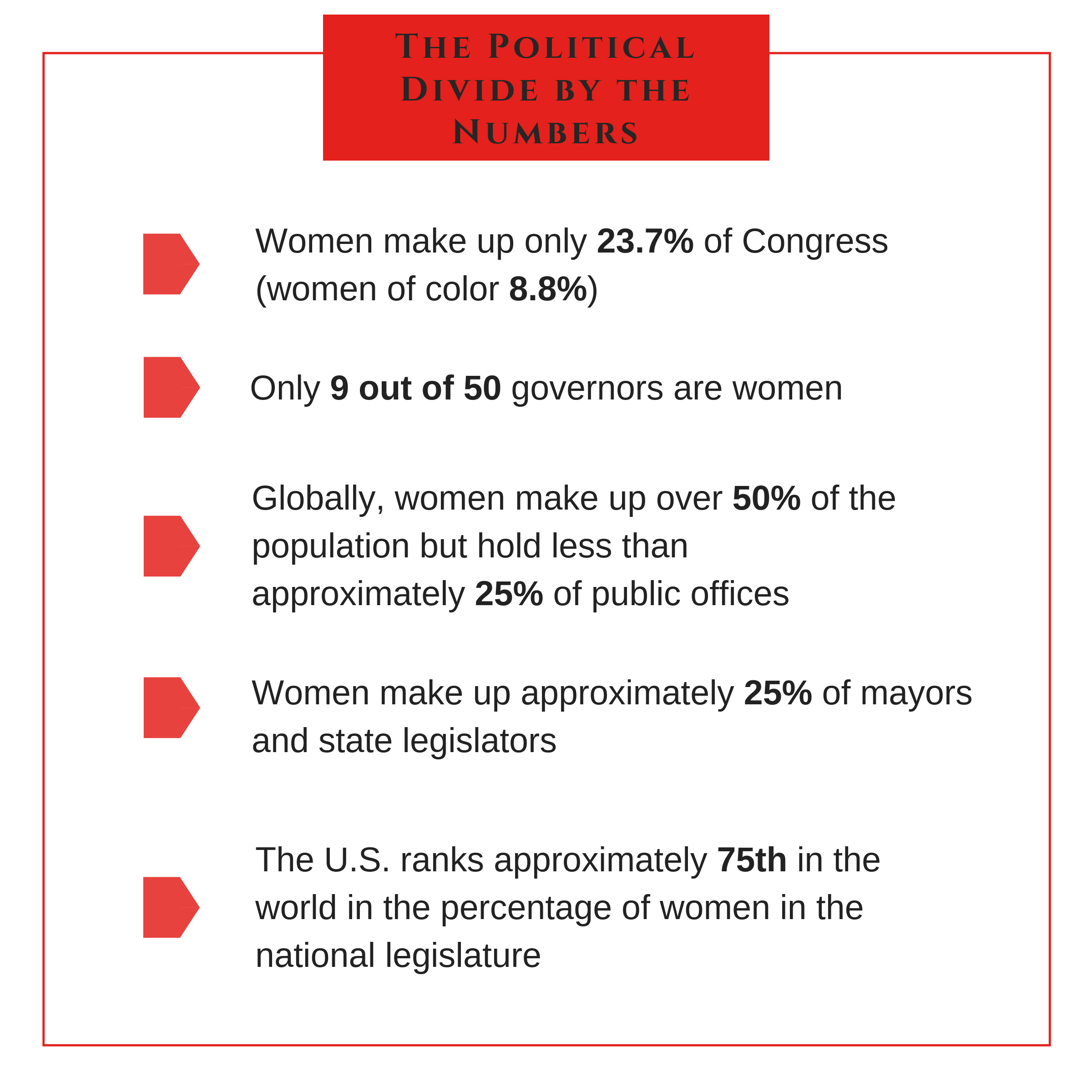 How would having more women politicians make a difference?*

“It’s important for the whole country that we are able to choose from all of our talent, not just a small percentage of it, otherwise we lower our standards. We need politicians who look like the country. 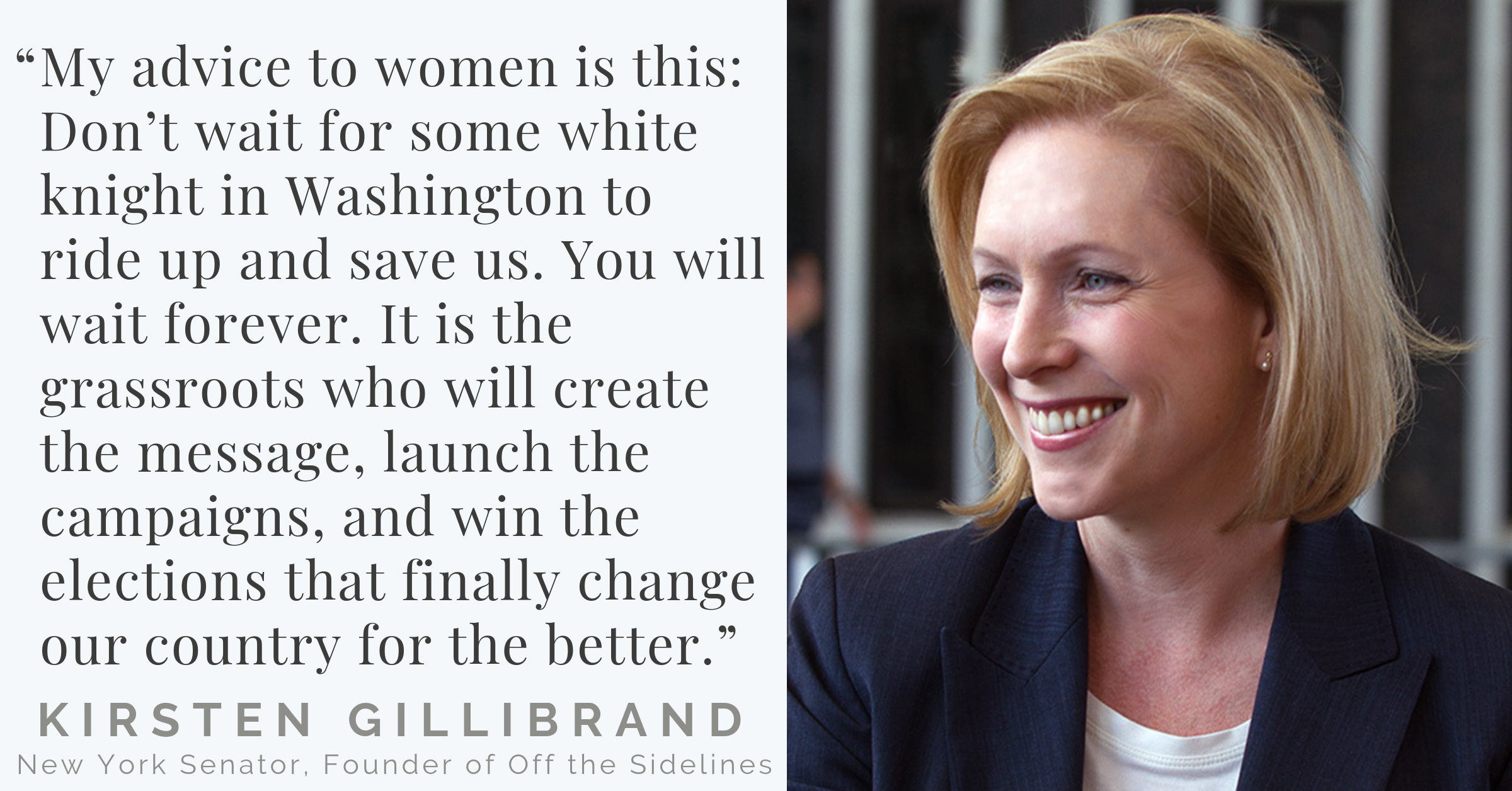 “I have been very pleased by the leadership and participation of younger generations of women, particularly the millennials, who are continuing what was started [last] January and are running for office at record levels, organizing their communities, and, as we have seen with #MeToo, are boldly speaking truth to power in order to fight for the change we so desperately need in this country. This is what the resistance is all about, and these signs help me continue to be hopeful during this very tumultuous and chaotic period in our country.”

—Nancy Pelosi—
Minority Leader of the House of Representatives 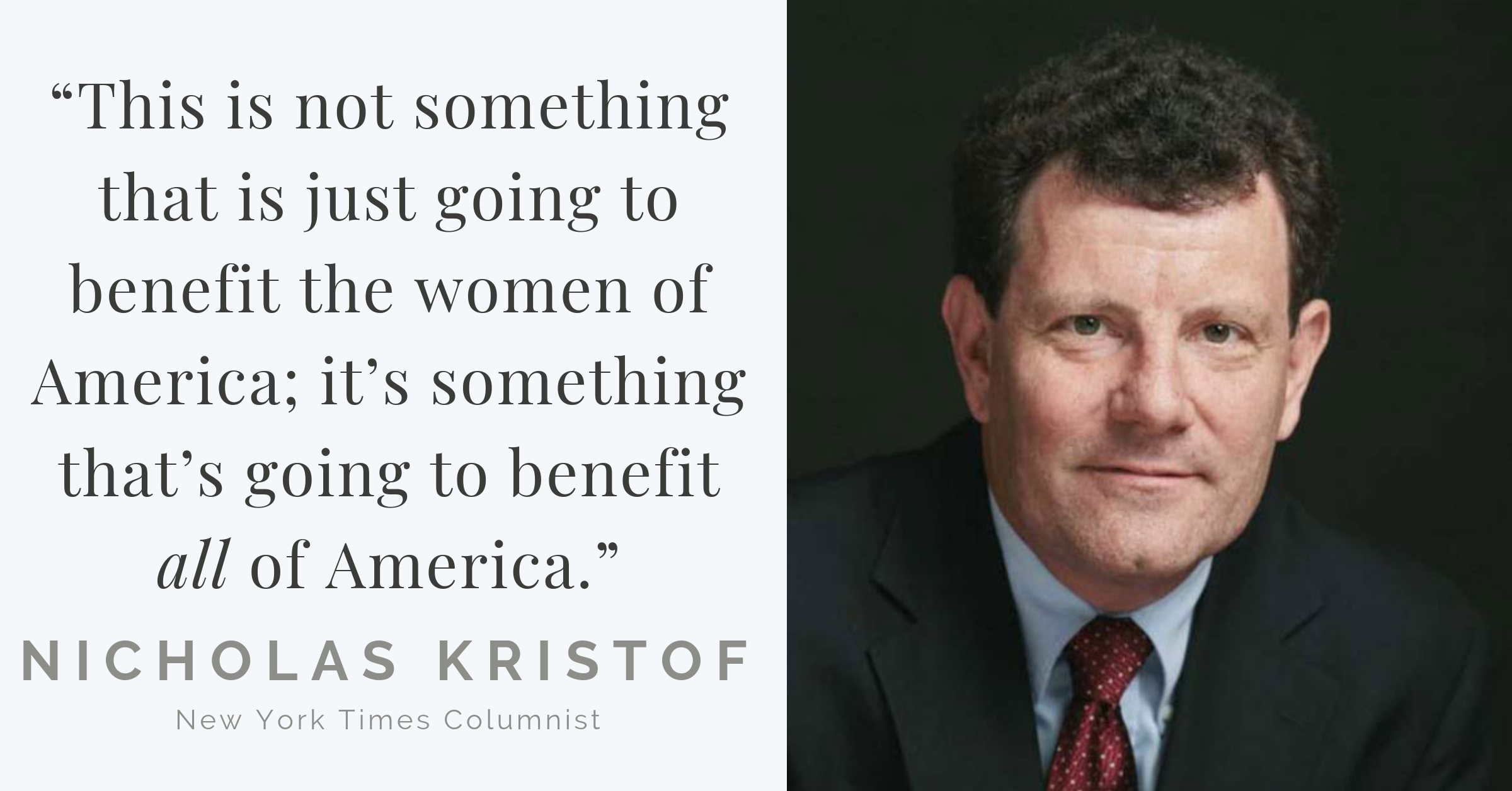 “I think that the great strength that women bring when they move into senior levels of politics is not that they’re more nurturing, caring, maternal figures, but that they will bring a certain level of different perspective, a different way of thinking, and that is just really valuable for all of us.”

“I really think women should be much more excited about a career in elective office. It’s a tough business, yes, but most are, and there is an incredible upside. You have a real chance to see and touch things you’ve been able to change that have made a positive impact on people’s lives. I just don’t know that it gets any better than that. And it is achievable. I really hope that women aspire to holding elective office. Our country really needs it.”

“I think the biggest challenge facing our nation, as far as more women getting involved in politics, is just the fact of women stepping up and being willing to run for office—to put everything on the line, to do the hard work, to go through the process itself, to risk winning or losing, and to step up to any kind of office, whether it’s president or heading up a major corporation.” 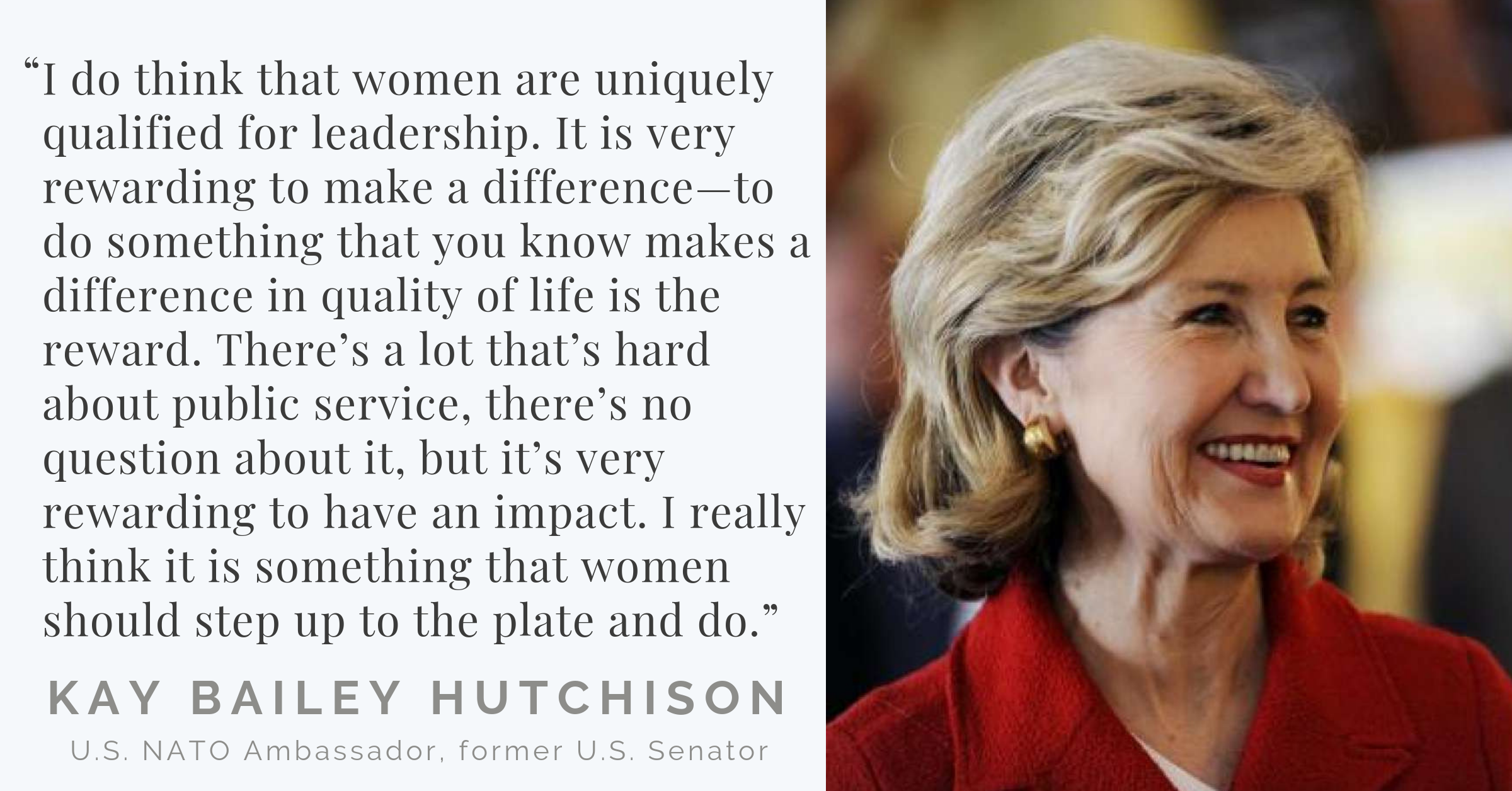 “The most important message for women is that they can do it. My call to action is very comprehensive: do whatever you can do. It’s a question of, Are you voting? Are you being heard? Are there issues that you care about that you could advocate for and let your representatives know how important they are to you? Would you ever consider running for office? Really making that request of women’s participation across the board.”

“What women don’t know enough is that when women run, they win as often as men do. In spite of the obstacles, when they do decide, ‘I’m going to do this because it’s important,’ they do win as often.” 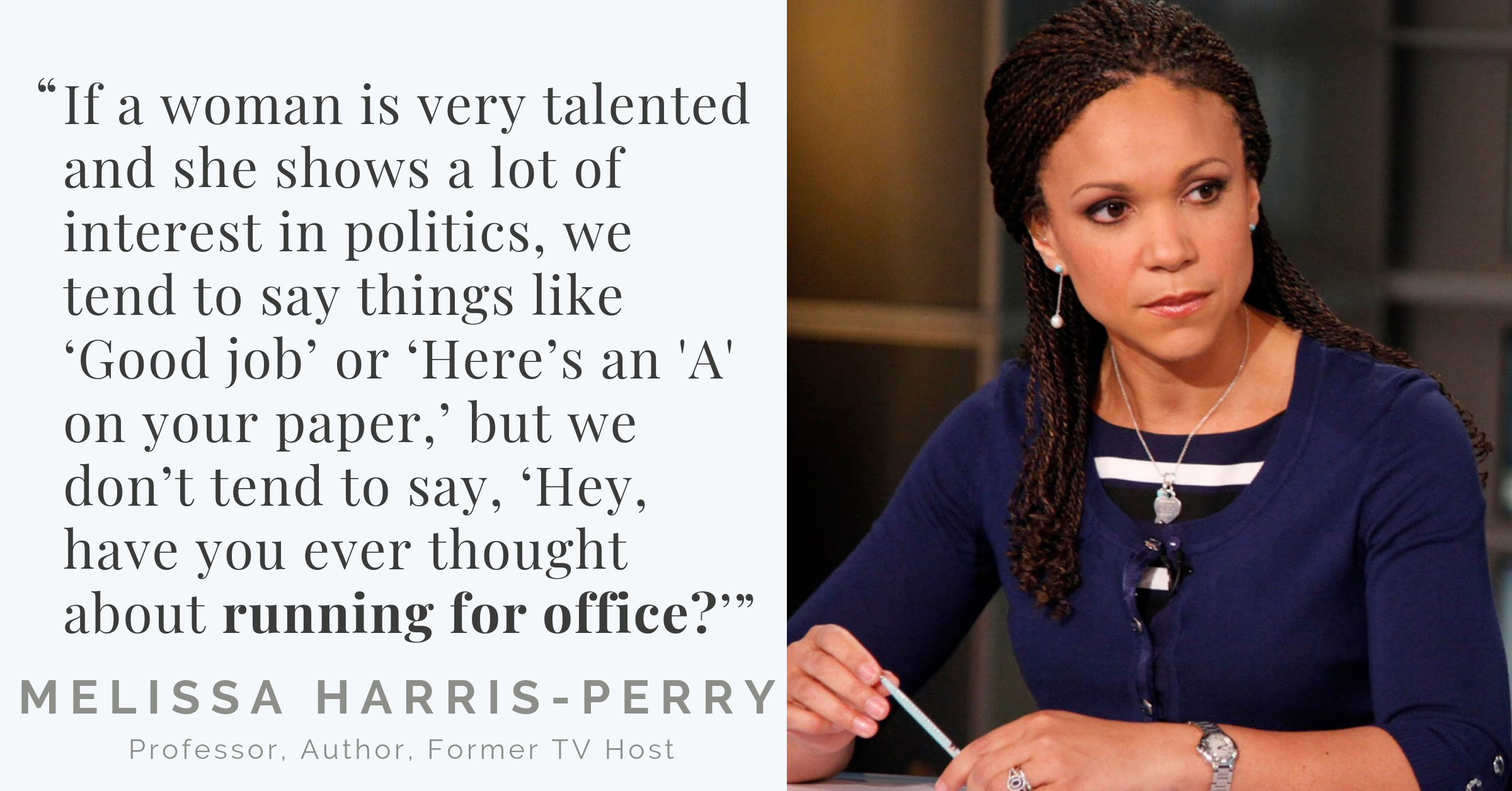 “I think it takes a while for women to realize what their power is, because we haven’t been part of this for very long. But I think what I have seen is that when women know their power, they really do know how to use it, not for their personal gain, but for the good of the country and the good of their constituents. There’s a big difference there between how women operate versus how men operate. Women know how to wield their power, and from what I see, it’s almost always for the greater good.”

“The men have been in charge of leadership in Congress for a long time and they don’t seem to be getting it right, so we are in the midst of a sadly dysfunctional government. Our government is operating in a somewhat dysfunctional way, and I think having more women could only help.”

“There’s been a lot of research into how men and women lead differently, but what I think is more powerful is you come from this outsider perspective, so when you take your seat at the table you don’t necessarily ask all the same questions that other people would. You don’t necessarily bring with you all the same people that other people would. You bring a different perspective, you bring a different background.”

“It’s about laying out a cultural discussion about how important it is for women to be involved and that we need everybody’s voices in a representative democracy—and the best kind of democracy is where the government looks like the nation, in order to get the policies we need. And we are so far from that right now.”

Click here for more articles about women in politics

All of the above quotes are condensed from interviews by journalist and author Marianne Schnall; the originals appeared in her articles and/or the books “Daring to Be Ourselves: Influential Women Share Insights on Courage, Happiness and Finding Your Own Voice” and “What Will It Take to Make a Woman President? Conversations About Women, Leadership and Power.”