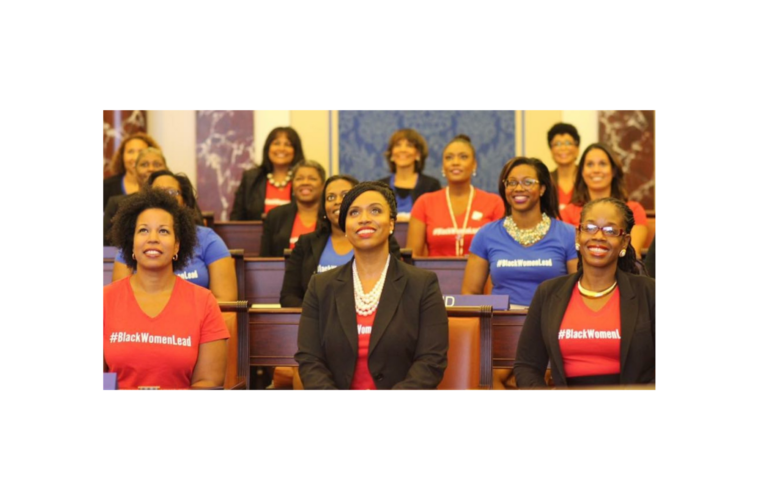 When Kamala Harris reached the historic milestone of becoming the first Black woman vice president, America also lost its lone Black woman Senator, making that moment bittersweet and highlighting the fact that we still have a long way to go when it comes to Black women’s political leadership. That stark reality, and the duality of both progress and continued inequity, are presented in an illuminating report, Reaching Higher: Black Women in American Politics 2021, from Higher Heights Leadership Fund, an organization dedicated to building the collective political power of Black women, and the Center for American Women and Politics (CAWP) at Rutgers University.

“We are pleased to partner with the Center for American Women and Politics for the sixth iteration of this report,” Glynda Carr, President and CEO of Higher Heights, told me. “It is a snapshot on the progress being made to elect Black women to political office and this year’s research highlights that while Black women have made strides in representation in elected leadership, there is still a tremendous opportunity for growth.”

In addition to Kamala Harris being the first woman, the first Black person and the first South Asian person to win the vice presidency, Black women found success across other levels of office and played pivotal roles in voter mobilization and voter turnout. More than two-thirds of Black women turned out to vote in the 2020 presidential election—the third highest rate of any race-gender group.

Even though Black women are still largely underrepresented in American politics, the report spotlights promising recent strides for Black women in politics, including:

• A record number of Black women ran for and won congressional offices in 2020.

• Between 2020 and 2021, Black women’s state legislative representation increased, though not as much as it did after the 2018 election.

• Black women now hold the top executive post in 8 of the 100 most populous cities, matching their proportion of the U.S. population, which is 7.8%.

Glynda Carr notes that these findings reflect trends that are slowly but powerfully transforming the political landscape: “In 2020, we saw another year of historic developments, coming after a record number of Black women running for office in 2018. We already knew that Black women would power the road to the White House and the road to 2020, but this data shows that Black women candidates are stepping off the sidelines as viable candidates with voters’ support. Black women are converting electoral power into political power,” said Carr. “Black women are a powerful force in the American political system, and their political power at the polls and on the ballot continues to grow and is increasingly recognized as the force it is. When Black women run for office, they not only challenge biased views of who can or should lead, but also disrupt perceptions of electability.”

Despite these recent gains, the data shows that “there is still vast opportunity for growth in the number of Black women running and winning at all levels of office,” especially the statewide elected executive offices.

The report highlights these key statistics:

• Despite being 7.8% of the population, Black women are less than 5% of officeholders elected to statewide executive offices, Congress and state legislatures.

• Just 17 Black women have ever held statewide elected executive offices, and no Black woman has ever been elected governor.

Black women’s underrepresentation is due in part to the fact that they face additional hurdles, including disparities in financial resources and outdated biases about what leaders look like in this country. “Black women continue to have to push through and jump over institutional obstacles and man-made barriers. And that includes raising money and raising money early,” said Carr.

This makes it all the more important to step up and support these candidates with our time, money and votes. As report author Kelly Dittmar, Associate Professor of Political Science at Rutgers University–Camden and Director of Research at CAWP, told me, “Once we have defined Black women’s underrepresentation as a problem, it’s up to all of us to try to solve it. That means supporting Black women at all stages of the campaign process, from candidate recruitment and emergence to the ballot box on Election Day. Citizens can support Black women on the campaign trail with their time and their money, and they can support Black women at the ballot box with their vote. And due to biases—often among long-time party influencers—about Black women’s electability, that support needs to come early and often to debunk myths of unelectability. Especially for those who spent much of the past 18 months on social media or elsewhere calling on others to ‘listen to Black women’ or ‘support Black women,’ it’s time to translate those hashtags into action that can actually enhance the support infrastructure for Black women to run and win elective office.”

Why is it so important to increase Black women’s representation in politics? As Dittmar explains, “In a representative democracy, it’s important that government truly represents the full range of diversity of the constituents it is meant to serve. That means ensuring that the voices and experiences of all groups are heard, and electing Black women helps to facilitate that. We know that Black women bring important perspectives to agenda-setting and policymaking, and that they disrupt otherwise white- and male-dominated institutions in ways that make those institutions friendlier to a wider range of the citizenry. We know that diversity in deliberation and decision-making yields better outcomes across any institutions, including political ones. It can also increase citizens’ faith and trust in governmental institutions by demonstrating important shifts away from the white, male status quo.”

The report is indicative of an even wider positive trend of the influence of Black women leaders rising across all industries and sectors and speaks to the slow but steady progress we are making toward diversity of all types across race, gender, sexuality, age and more. Such diversity ensures that all of our country’s much-needed voices, visions, solutions and skills are utilized, which ultimately benefits everyone, since, as Carr points out, “From corporate boardrooms to city halls to Congress, decision-making tables make better decisions when they are diverse.”

Taking Action As We Look Ahead

Getting more Black women into positions of power in politics means recognizing the additional hurdles they face as candidates and proactively working to expand the pipeline in local, state and national offices by encouraging more Black women to run and supporting them once they do. The upcoming pivotal 2022 elections present the perfect opportunity to do just that.

“The 2022 elections offer an immediate occasion for harnessing Black women’s political power both at the ballot box as voters and on the ballot as candidates,” Dittmar said. “To accelerate the progress we’ve seen in recent years and to take advantage of opportunities forthcoming in 2022, the work must continue to create more equitable conditions under which Black women candidates both emerge and compete.”

So far, the 2022 elections look promising for Black women running at record numbers, including the fact that, “as of September 2021, more than 13 Black women have already announced major-party Senate bids, indicating that a new record for Black women candidates for the U.S. Senate will be set in the 2022 cycle.”

To turn these bids into wins and continue to close the gap of Black women’s representation and uplift diversity in leadership, Carr offers this call to action: “We need to activate our networks, giving them the tools to be able to prepare, to vote, to support candidates that inspire them and to volunteer their time. Give your time, talent and resources to help build a democracy we can believe in.”

Note: The report was published in October 2021 and some of the statistics may have changed since the date of publication. Click here for the most current numbers of Black women in elected office.

Follow the links to find out more about Higher Heights Leadership Fund and Center for American Women and Politics (CAWP).

This article was originally published at ForbesWomen.

Marianne Schnall is a widely-published interviewer and journalist and author of What Will It Take to Make a Woman President?, Leading the Way, and Dare to Be You. She is also the founder of Feminist.com and What Will It Take Movements and the host of the podcast ShiftMakers.