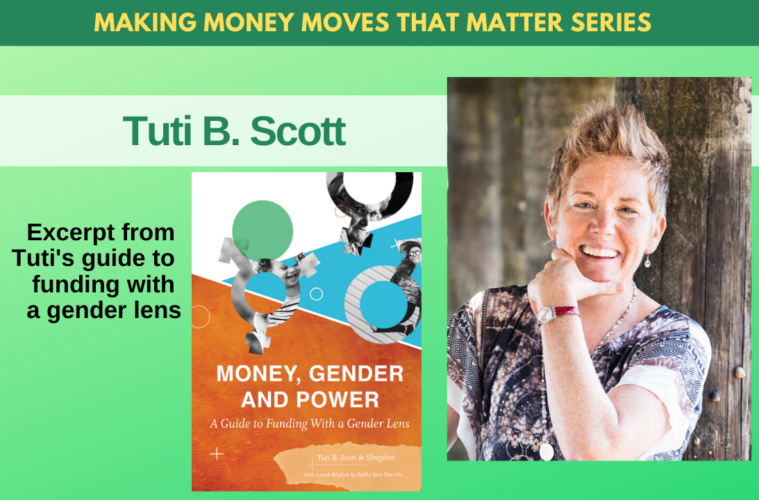 Money, Gender and Power: A Guide to Funding with a Gender Lens

The following is an excerpt from Money, Gender and Power: A Guide to Funding with a Gender Lens by Tuti B. Scott in partnership with Slingshot. This guide was assembled with Slingshot’s Jewish giving community in mind, but the material is universal.

You can download the full guide here. To order a paper copy of the guide click here. 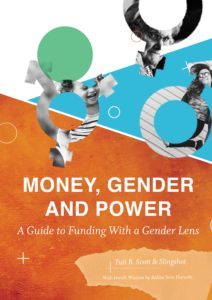 Today, more than ever, the world needs us to challenge traditional gender norms; the world needs more gender avengers. We welcome you to join us as an advocate for equity from whichever seat you occupy—as a philanthropist, an advisor, a board member, a Jewish communal professional, an investor, an activist, or simply as a human being who seeks to live in a more just world.

Since the 1970s, U.S. philanthropy awarded to women and girls of all backgrounds and faiths has been less than 7 percent.1 At the same time, we know that investing in women has a profound ripple effect. Women invest 90 percent of their income in family or community while men invest 30 to 40 percent.2 The Food and Agriculture Organization of the United Nations estimates that if women had the same access to productive resources as men, they could increase yields on their farms by 20 to 30 percent and reduce the number of people living in hunger by 100 to 150 million.3

The World Bank, USAID, Calvert Foundation, and other global agencies have been incorporating a gender lens in their programmatic work for over a decade. Financial firms such as State Street, Barclays, Morgan Stanley, and Pax have initiated investment vehicles using a gender lens. Leading international organizations like HeForShe, Catalyst, The Representation Project, and the Geena Davis Institute on Gender in Media have mobilized a growing movement to bring a gender equity platform to all sectors. All this work has contributed to noted progress, but there is much more learning and work to be accomplished.

Public exposure of the abuses of power by cisgender men (#MeToo and Time’s Up) has opened the door for empathy across identities. The term toxic masculinity has permeated our culture, building a deeper understanding of the social traits that devalue women and foster domination and violence. There is an outpouring of compassion for and growing awareness of what millions of women of color, gender-nonconforming people, and white women have endured in the home and workplace. For women, this is a moment to own our agency and dismantle the exploitative power system.

Cisgender (cis) is a term used to describe a person whose gender identity aligns with the sex assigned to them at birth and in this guide, the term man/ men refers to cisgender men. “Toxic masculinity is a narrow and repressive description of manhood, designating manhood as defined by violence, sex, status, and aggression. It’s the cultural ideal of manliness, where strength is everything while emotions are a weakness; where sex and brutality are yardsticks by which men are measured, while supposedly ‘feminine’ traits—which can range from emotional vulnerability to simply not being hypersexual—are the means by which your status as ‘man’ can be taken away.” 4

We present this work with the core beliefs that (1) gender equity is fundamental to achieving a more equitable and sustainable society and world, and (2) using a gender and social justice lens helps achieve greater impact in our work as philanthropists and as social sector investors.

Millennia of living in a world where male domination is the norm have created unhealthy, oppressive social structures and attitudes. In addition, a binary system of gender—the idea that gender exists in two distinct, disconnected forms of masculine and feminine—limits how we can express ourselves and/or be in partnership. This workbook offers you the opportunity to stretch your thinking beyond the gender conventions of traditional media, literature, religion, and pop culture.

Our task is to engage as many people as possible with this material. We realize that many philanthropic families face an enormous divide along generational lines in understanding gender. We hope that we are presenting accessible material that sparks meaningful family dialogue.

Our intent is for readers of this workbook to become more aware of the opportunity, necessity, and responsibility to deploy Jewish funding (primarily philanthropy but also venture capital and impact investing dollars) using a gender justice lens. Once there is awareness of what assumptions and systems are embedded in their choices of their giving, there will be expanded potential for all of us to shift our dollars with new methods and to new spaces. This shift will be catalyzed by exploring our own values, attitudes, and behaviors that have to date informed how, where, and why we give and invest.

We know that biases are endemic to our society. Norms and assumptions about gender have shaped our culture, behaviors, and attitudes. With a gender lens, we start to understand how structural and systemic discrimination continues to leave underrepresented people (often women of all backgrounds and identities) out of power structures where decision-making occurs. (A racial lens can also be used in philanthropy. We are using this guide to focus on a gender lens and encourage highly effective philanthropy, which beckons the world to invest in brown, Black, and trans/queer/lesbian women.)

In her book, Gender Lens Investing: Uncovering Opportunities for Growth, Returns, and Impact (2016), Jackie VanderBrug, a gender lens investing pioneer, writes that a gender lens creates a “viewfinder” for people to realize that societal and cultural norms have not put women in decision-making positions, in solution spaces, or anywhere near access to capital.

By simply asking questions about gender, we can clearly see the implicit gender bias that negatively influences everyday decisions in hiring, leadership, housing, and health, among other areas. Without understanding this dynamic, it is impossible to break systemic patterns that have far-reaching negative economic and political implications, not just for women but for the health of all our communities and our world.

We invite you to expand your vision of equity. Try a new perspective. When we apply a gender lens to philanthropy, we can begin to see clearly how perceptions of gender affect our own decision-making. And we also see how addressing gender justice makes us more effective in achieving our desired impact inside and outside of Jewish life.

About Tuti B. Scott

As founder of Changemaker Strategies, Tuti B. Scott is a consultant and coach to high-achieving leaders and teams working on the front lines of social change. She was the producer for the What Will it Take Movements “Women and Money” event in September 2019, which focused on turning new knowledge into action in the gender lens investing space.

After a 30-year career in women’s leadership, Title IX protections, and strategic philanthropy consulting, Tuti is now focused on engaging people in gender lens philanthropy and investing. Tuti currently serves as Interim CEO of Tides after nine years on the Tides Network Board, and is a founding board member of the Women Win Foundation. She has been a featured speaker/producer for the Women’s Funding Network, the Jewish Women’s Funding Network, and member funds of these networks. She enjoys learning with and elevating the voices of the next generation, women of color and queer/non-binary leaders from all sectors wherever possible. You can visit Tuti’s website at www.tutiscott.com.

Engaging a community of young Jewish philanthropists to make a lasting impact on the Jewish world and beyond, Slingshot offers the tools they need to build game-changing partnerships with organizations that will strengthen the Jewish future and shape the Jewish community to be vibrant and continuously evolving. Find out more at www.slingshotfund.org.