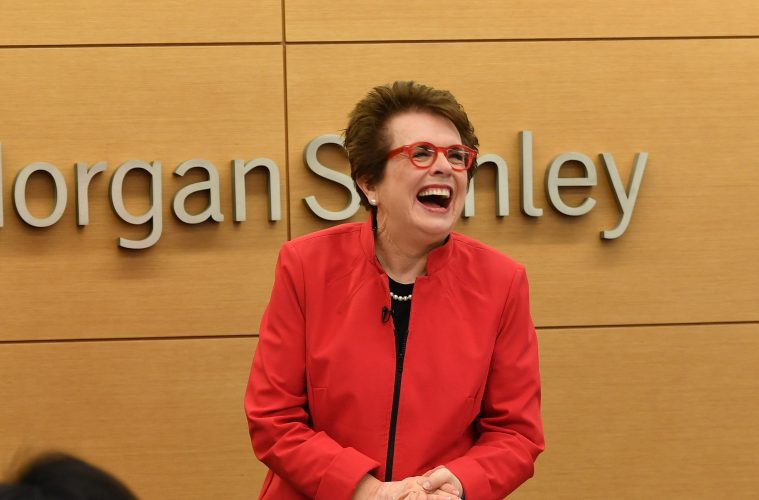 One of the most respected athletes and change makers of the 20th century, tennis legend Billie Jean King, is still making her mark today as a champion for social change and equality.

I recently caught up with King at the Women’s Sports Foundation Athletes Leadership Connection in New York where she was being honored for her 75th birthday and where I heard her speak at a Q&A session and had the opportunity to interview her. She shared her personal insights on why women’s leadership is so important, how being involved in sports helps girls develop leadership qualities, and what her call to action is for women and girls everywhere.

Sports as a Platform for Change

King explained that at the age of seven she knew she wanted to do something great with her life. As she got involved in tennis, she began to gain confidence as an athlete and as an activist. She said, “At twelve I had an epiphany. I was daydreaming, and I thought, [in tennis] everybody wears white shoes, white socks, white clothes, we played with white balls in those days, and everybody who played was white. And I said, ‘Where is everybody else?’ That was the moment I promised I was going to fight for equality for the rest of my life.”

She went on to become the world’s number one tennis player—winning 39 Grand Slam titles, including a record 20 titles at Wimbledon, and defeating male opponent Bobby Riggs in “The Battle of the Sexes” match, considered one of the greatest moments in sports history. King founded the Women’s Sports Foundation in 1974, a powerful organization dedicated to ensuring all girls have equal access to sports and physical activity and the tremendous life-long benefits they provide.

Why is it so important to have women in leadership positions? King told me, “They have proven now with data that if you have more women on your board in business, net profits go up to 16 percent more. Also, you want to hear different ideas, so you should have different cultures and you should have women. What happens is you stay ahead as a company; you’re going to fall behind if you only listen to yourselves all the time. They’ve proven it over and over. So it is good to have women represented in C-Suites, and 96 percent of women in C-Suites played sports, so sports really go hand in hand with leadership.”

King herself says that it was being involved in sports that gave her the confidence to overcome shyness and speak up: “When I was a kid, tennis was what gave me confidence when I felt like I didn’t fit in.” 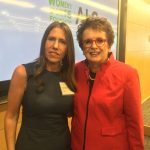 Words of Wisdom for Women and Girls

This socialization can hold women back in their careers, King told me. “Here’s what happens a lot with a job. A job will have ten points to it, and the girl will look at nine and go, ‘I can’t do that tenth one.’ A guy will look at it and go, ‘I knew five out of ten, and I’ll bluff my way through the other five.’ She doesn’t have to be perfect. If she can do six or seven or five, she is fine—go for it.”

“Another thing is women are usually hired on performance and men are hired on potential. It is very important that when companies are hiring they start thinking about women’s potential, not just their performance because they always keep us back that way. Like if a woman is going to get on a board, what kind of experience does she have? Well, 75 percent of men that are on boards are rookies. They haven’t been on any board either, but no one ever questions that. So women have to stand up and remind them, ‘Look, I have potential. I can do this.’”

King urges women and girls to believe in themselves and in what they have to offer: “Think about your potential—what you’ve been given. Practice your strengths. Know your strengths because just like in sports, we practice our strengths every single day and we make our weaknesses adequate. If you have a strength, go for it. Zone in on that and that will help you decide where you are going to go.”

How to Bounce Back

In addition to boosting confidence and leadership skills, sports also teach us important life lessons and ways of handling success and failure, King explained. “Sports teach us resilience. We bounce back.”

Her advice is to stay in the present moment: “In tennis, I take it one ball at a time, staying in the now, staying in the process. In every single sport and in life, being in the moment—when you’re in the zone, when your head and your heart and your gut are integrated—that’s when we do our best.”

And when things aren’t working out, King offered this piece of wisdom: “It’s not failure, it’s feedback. You’re always getting feedback from whatever experience you have in life, whether it’s good or sad or difficult, you keep learning. You’ve got to keep learning.”

We Can All Make a Difference

Billie Jean King has certainly made a difference as an athlete and activist. With all the problems our world is facing, it’s easy to feel overwhelmed when we think about how to individually do our part to make positive change.

But King wants us all to remember this: “Whatever you care about, you can make a difference. You really can. Don’t ever underestimate yourself. Do not underestimate the human spirit.”

At the Women’s Sports Foundation Athletes Leadership Summit, I also took part in a panel called “Raise the Bar: Using Your Voice to Make a Difference.” I joined Sandra Richards, Managing Director at Morgan Stanley and veteran sports journalist and advocate Sam Marchiano as we talked with 2012 gold medalist in gymnastics Jordyn Wieber, an outspoken voice for change. Find out more about the event and our Women & Sports Initiative.

This article originally appeared at ForbesWomen.